This is the multi-page printable view of this section. Click here to print.

Return to the regular view of this page.

Tips and tricks for using ClickHouse with different cloud services.

Modifying the ClickHouse cluster settings manually can lead to the cluster not loading or other issues. Change settings only with full consultation with an Altinity.Cloud support team member, and be ready to remove settings if they cause any disruption of service.

To add the access_management setting to an Altinity.Cloud ClickHouse Cluster:

It reads mysql binlog directly and transform queries into something which clickhouse can support. Supports updates and deletes (under the hood implemented via something like ReplacingMergeTree with enforced FINAL and ‘deleted’ flag). Status is ’experimental’, there are quite a lot of known limitations and issues, but some people use it. The original author of that went to another project, and the main team don’t have a lot of resource to improve that for now (more important thing in the backlog)

The replication happens on the mysql database level.

Debezium can read the binlog and transform it to Kafka messages. You can later capture the stream of message on ClickHouse side and process it as you like. Please remeber that currently Kafka engine supports only at-least-once delivery guarantees.

It’s used by several companies, quite nice & flexible. But initial setup may require some efforts.

Same as above but using https://maxwells-daemon.io/ instead of debezium.

Have no experience / feedback there, but should be very similar to debezium.

That was done long time ago in altinity for one use-case, and it seem like it was never used outside of that. It’s a python application with lot of switches which can copy a schema or read binlog from mysql and put it to clickhouse. Not supported currently. But it’s just a python, so maybe can be adjusted to different needs.

Accessing MySQL data via integration engines from inside clickhouse.

MySQL table engine / table function, or MySQL database engine - clickhouse just connects to mysql server as a client, and can do normal selects.

We had webinar about that a year ago: https://www.youtube.com/watch?v=44kO3UzIDLI

Using that you can easily create some ETL script which will copy the data from mysql to clickhouse regularly, i.e. something like

Works great if you have append only table in MySQL.

There are also MySQL dictionaries, which can be very nice alternative for storing some dimensions information in star schema.

Note: that install driver linked against iodbc (which is default for Mac), some homebrew applications (like python) may require unixodbc driver to work properly. In that case see Build section below.

On Windows you can create/edit DSN using GUI tool through Control Panel.

The list of DSN parameters recognized by the driver is as follows:

If some software doesn’t work properly with that driver, but works good with other drivers - we will be appritiate if you will be able to collect debug info.

To debug issues with the driver, first things that need to be done are:

Collected log files will help to diagnose & solve the issue.

If you don’t see a package that matches your platforms, or the version of your system is significantly different than those of the available packages, or maybe you want to try a bleeding edge version of the code that hasn’t been released yet, you can always build the driver manually from sources.

Note, that it is always a good idea to install the driver from the corresponding native package (.msi, etc., which you can also easily create if you are building from sources), than use the binaries that were manually copied to some folder.

The general requirements for building the driver from sources are as follows:

Additional requirements exist for each platform, which also depend on whether packaging and/or testing is performed.

Execute the following in the terminal to install needed dependencies:

Note: usually on Linux you use unixODBC driver manager, and on Mac - iODBC. In some (rare) cases you may need use other driver manager, please do it only if you clearly understand the differencies. Driver should be used with the driver manager it was linked to.

Clone the repo with submodules:

Enter the cloned source tree, create a temporary build folder, and generate a Makefile for the project in it:

…and, optionally, run tests (note, that for non-unit tests, preconfigured driver and DSN entries must exist, that point to the binaries generated in this build folder):

For MacOS: if you configured the project with ‘-G Xcode’ initially, open the IDE and build all, package, and test targets manually from there

CMake bundled with the recent versions of Visual Studio can be used.

An SDK required for building the ODBC driver is included in Windows SDK, which in its turn is also bundled with Visual Studio.

You will need to install WiX toolset to be able to generate .msi packages. You can download and install it from WiX toolset home page.

All of the following commands have to be issued in Visual Studio Command Prompt:

Clone the repo with submodules:

Enter the cloned source tree, create a temporary build folder, and generate the solution and project files in it:

…and, optionally, run tests (note, that for non-unit tests, preconfigured driver and DSN entries must exist, that point to the binaries generated in this build folder):

…or open the IDE and build all, package, and test targets manually from there:

The list of configuration options recognized during the CMake generation step is as follows:

You can just copy the library to another computer, in that case you need to

All this involves modifying a dedicated registry keys in case of MDAC, or editing odbcinst.ini (for driver registration) and odbc.ini (for DSN definition) files for UnixODBC or iODBC, directly or indirectly.

This will be done automatically using some default values if you are installing the driver using native installers.

Otherwise, if you are configuring manually, or need to modify the default configuration created by the installer, please see the exact locations of files (or registry keys) that need to be modified.

The trivial & natural way to talk to ClickHouse from Spark is using jdbc. There are 2 jdbc drivers:

ClickHouse-Native-JDBC has some hints about integration with Spark even in the main README file.

But proper partitioning of the data (to spark partitions) may be tricky with jdbc.

You can load data into hadoop/hdfs using sequence of statements like INSERT INTO FUNCTION hdfs(...) SELECT ... FROM clickhouse_table later process the data from hdfs by spark and do the same in reverse direction.

Similar to above but using s3.

You can call other commands from Spark. Those commands can be clickhouse-client and/or clickhouse-local.

do you really need Spark? :)

In many cases you can do everything inside ClickHouse without Spark help :) Arrays, Higher-order functions, machine learning, integration with lot of different things including the possibility to run some external code using executable dictionaries or UDF.

Article is based on feedback provided by one of Altinity clients.

It makes sense to split what CatBoost does into 2 parts:

Compared to Fast.ai, CatBoost pre-processing is as simple to use and produces results that can be as good as Fast.ai.

The number crunching part of Fast.ai is no-config. For CatBoost you need to configure it, a lot.

CatBoost won’t simplify or hide any complexity of the process. So you need to know data science terms and what it does (ex: if your model is underfitting you can use a smaller l2_reg parameter in the model constructor).

In the end both Fast.ai and CatBoost can yield comparable results.

Regarding deploying models, CatBoost is really good. The model runs fast, it has a simple binary format which can be loaded in ClickHouse, C, or Python and it will encapsulate pre-processing with the binary file. Deploying Fast.ai models at scale/speed is impossible out of the box (we have our custom solution to do it which is not simple).

TLDR: CatBoost is fast, produces awesome models, is super easy to deploy and it’s easy to use/train (after becoming familiar with it despite the bad documentation & if you know data science terms).

The project seems to be a good idea but it’s too young. I was using the GUI version and I’ve encountered some bugs, and none of those bugs have a good error message.

GCS with the table function - seems to work correctly for simple scenarios.

Essentially you can follow the steps from the Migrating from Amazon S3 to Cloud Storage.

s3 Disk on the top of GCS and writing to GSC may be NOT working because GCS don’t support some of bulk S3 API calls, see https://github.com/ClickHouse/ClickHouse/issues/24246

To connect to some Kafka cloud services you may need to use certificates.

If needed they can be converted to pem format and inlined into ClickHouse config.xml Example:

How to test connection settings

Use kafkacat utility - it internally uses same library to access Kafla as clickhouse itself and allows easily to test different settings.

Is there some more documentation how to use this multiconfiguration for Kafka ?

So it load the main config first, after that it load (with overwrites) the configs for all topics, listed in kafka_topic_list of the table.

And after that in configuration:

The same fragment of code in newer versions: https://github.com/ClickHouse/ClickHouse/blob/d19e24f530c30f002488bc136da78f5fb55aedab/src/Storages/Kafka/StorageKafka.cpp#L474-L496

There are couple options:

It’s also possible to skip up to N malformed messages for each block, with used setting kafka_skip_broken_messages but it’s also does not support all possible formats.

It’s possible to stream messages which could not be parsed, this behavior could be enabled via setting: kafka_handle_error_mode='stream' and clickhouse wil write error and message from Kafka itself to two new virtual columns: _error, _raw_message.

So you can create another Materialized View which would collect to a separate table all errors happening while parsing with all important information like offset and content of message.

EOS consumer (isolation.level=read_committed) is enabled by default since librdkafka 1.2.0, so for ClickHouse - since 20.2

BUT: while EOS semantics will guarantee you that no duplicates will happen on the Kafka side (i.e. even if you produce the same messages few times it will be consumed once), but ClickHouse as a Kafka client can currently guarantee only at-least-once. And in some corner cases (connection lost etc) you can get duplicates.

One of the threads from scheduled_pool (pre 20.9) / background_message_broker_schedule_pool (after 20.9) do that in infinite loop:

On any error, during that process, Kafka client is restarted (leading to rebalancing - leave the group and get back in few seconds). 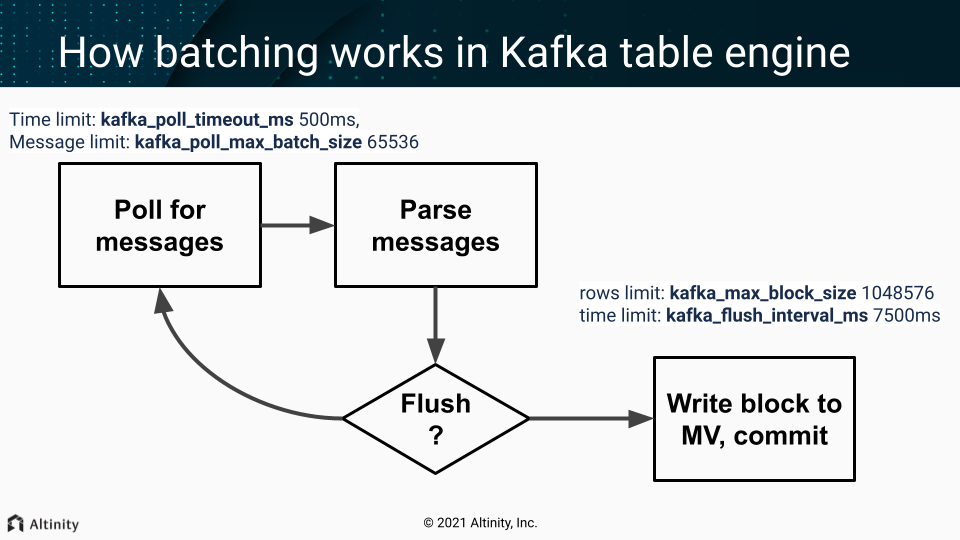 These usually should not be adjusted:

You may want to adjust those depending on your scenario:

For very large topics when you need more parallelism (especially on the insert side) you may use several tables with the same pipeline (pre 20.9) or enable kafka_thread_per_consumer (after 20.9).

Before increasing kafka_num_consumers with keeping kafka_thread_per_consumer=0 may improve consumption & parsing speed, but flushing & committing still happens by a single thread there (so inserts are linear).

What will happen, if we would run SELECT query from working Kafka table with MV attached? Would data showed in SELECT query appear later in MV destination table?

So it’s not recommended to run SELECT queries on working Kafka tables.

In case of debug it’s possible to use another Kafka table with different consumer_group, so it wouldn’t affect your main pipeline.